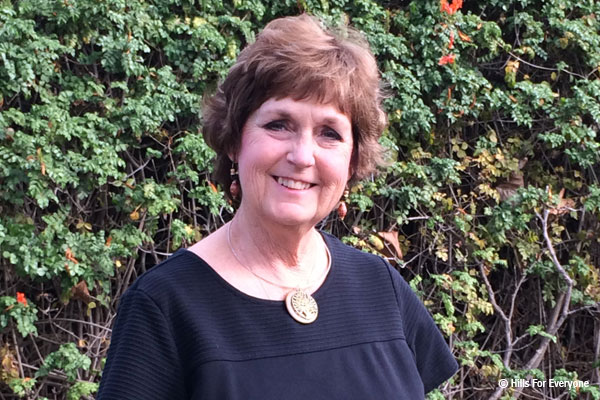 What was it like when you established the Chino Hills State Park, and how are things different now?

Claire: The act of establishing the state park has been going on and is still going on over the last 41 years. There wasn’t like a single moment where it happened. The group Hills For Everyone was formed in 1977 by a young man at the time named Dave Meyers, and he kind of ran into one too many bulldozers one day—ripping up hills that he hiked in as a boy and he couldn’t bear to watch the loss anymore. So, he joined forces with other like-minded people and formed Hills For Everyone. They thought of making it 4 regional parks because the park covered 4 counties—Orange County, San Bernardino, Los Angeles, and San Diego—and that was too complicated, so they settled on a state park.

He hiked the hill so many times that he knew the lay of the land, and designed the park himself. He designed it in a unique way, along ridgeline boundaries so that once you’re inside the park, you don’t know that there are millions of people on the other side. When he started, there were 9 million people on the other side, and now, there are 18 million. One thing the ridgeline does is protect water quality for wildlife. Pesticides and herbicides cannot contaminate the water for wildlife that live there. Currently, we are not finished with the ridgeline. The eastern side is not in state ownership yet.

What it feels like is… I mean extraordinary. I get to see it everyday. “Rest my eyes on the natural ridgelines, and there is something that comes from that that’s rejuvenating.”

How are things different today?

Claire: A lot more people. A lot of youth. Some people who are not treating it well… We’re having a lot of problems with mountain bikers. We have 90 miles in the park and that’s not enough for them. They cut new trails with chainsaws, shovels, and hand saws. They go too fast, so they’re ruining the experience for people who are walking. That’s been a real disappointment.

The next real disappointment is that they were never there to help establish the park, unlike the horseback riders and the hikers. Mountain bikers never showed up to testify like the other groups. There were no mountain bikers before.

What are the main challenges you face to save the Puente-Chino Hills?

Claire: Of course, finding funding to buy the land. That’s the only way it’s eventually saved.

It’s to develop the political will among decision makers at all levels (federal, state, and local) to do it. I’ve never seen anything fail. You can save just about anything as long as there’s a political will. Term limits (every 6 years, every 8 years) have new people come in so you need to retell the story with every effort.

Make people feel like they can make a difference by saving the land. Many people say you can’t save the land, but there is political will to save the land. They want to see it saved, too. They just often don’t know what to do, don’t know the steps you need to take to save land. But, we’ve taken those steps, so a lot of things are in place. Now, it’s a matter of finding funding to save the land.

You always need a willing seller. There’s a lot of land to be saved, and you can’t do it unless you have a landowner to save it; you have work to do.

Funding for conservation efforts is more important than ever. What are some challenges that you encounter in obtaining funding?

Claire: Proposition 68 was a really big step forward. We used to have regular parks bond efforts that passed every 4 years. They weren’t as big but still useful. One other issue we have to fight is that a lot of money goes to Northern California because land is cheaper up there.

But down here is where the votes are. For a long time, Chino Hills State Park had good representation by Democrats and Republicans to bring funding.

California State Parks have been another source of funding, but they have been struggling for 8-9 years and haven’t acquired land down south. They’re the people who should be buying some of the land next to the State Park. In the end, that’s who the rightful manager should be.

In Orange County, we passed Measure M, a transportation sales tax measure, and part of the funding we negotiated that $243 million from that measure be set aside for landscape-level mitigation. Rather than put in some palm trees and ice plants at freeway intersections, now they need to buy really big important parcels of land, so it’s real mitigation.

We’re hoping Measure A will offer some funding for the Puente Hills side in LA county. There’s also funding from Habitat Authority.

A lot of people are working to get cap-and-trade money in protection of land. For instance, if you buy a big piece of land that would otherwise go to development, you get a double bang for your buck. You get to keep the natural resources there that reduce greenhouse gas emissions, but you also reduce the number of cars traveled because the houses aren’t there so the cars aren’t there.

The best way to reduce GHG emissions is to save land.

How do you envision the San Gabriel Mountains Recreation Area can benefit the Puente-Chino Hills area?

The other interesting thing I heard from an eagle expert, and he also works on condors. He told me there are condors in Mexico because we maintained the natural landscape of the Puente-Chino Hills, condors will be able to fly up to the Santa Anas, fly over the San Gabriel Valley, and back up the San Gabriel Mountains. Imagine that… a condor with a 9-foot wingspan flying over the San Gabriel Valley. It needs to have those natural ridgelines to create the right kind of draft to keep it afloat.

Obviously, we’re all connected and the more we’re connected, the healthier we all are.

What would make your job easier?

Claire: More hopeful people. For instance, a lot of things we’ve been doing recently are to fight projects next to the State Park that would harm the State Park. And we just won one. It was a 17 year battle, and the owner took the case to Supreme Court. And we won. People were saying you can’t fight city hall. We prevailed because we could.

My dad was a professor at Harvey Mudd College, and there would be teams of four students assigned to a professor. They would be assigned to solve real-life technical problems, like AQMD and other companies would come to Harvey Mudd with real-life problems for students to solve. My dad’s philosophy was to give the hardest problem to the newest students because they hadn’t learned that you couldn’t do it. Just like how we won.

It just takes a few really good people to go the distance. If you step into it wanting to save land—in whatever way you choose—it’s just amazing how much can get done with very few people. The more good people that step into it, the easier it’s going to be.

View all posts by annavan05